Home » CEM » History
The Council for Electronic Media (CEM) was established as a national media regulator in the end of 2001 in lieu of the dissolved National Council for Radio and Television (Law Amending the Radio and TV Act, published in State Gazette (SG) No 96 of 9 November 2001). There have been many changes in the composition and structure of the CEM over the years. 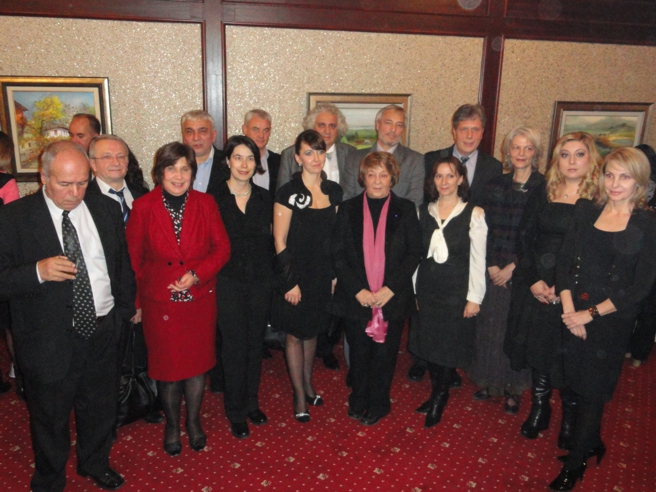 December 2011. Celebrating the 10th anniversary of the CEM at the National Palace of Culture, Matti Hall. NCRTV [The National Council for Radio and Television] and CEM members attend. Left to right: front row: Alexander Tomov, Lilia Raicheva, Raina Nikolova, Anyuta Asenova, Maya Vaptsarova, Maria Stefanova, Anna Hadzhieva; back row: Veselin Stoikov, Stefan Dimitrov, Georgi Stoimenov, Georgi Lozanov, Boicho Kulinski, Alexander Ivanov, Nelly Ognyanova, Sofia Vladimirova.
The concept of regulating the media environment in Bulgaria was introduced in the end of the previous century as Article 8 of the Ratio and TV Act (RTVA, SG No 77/10 September 1996) envisaged the establishment of a specialised State authority — the National Council for Radio and Television (NCRTV).  However, at that time a group of Members of Parliament (MPs) challenged the constitutionality of certain RTVA provisions by an application to the Constitutional Court of Bulgaria. The Constitutional Court held that certain provisions were incompatible with the Constitution (Ruling No 21/14 November 1996) and the contemplated media supervisor was not established in the initially intended form.
One year later the 38th National Assembly (the Bulgarian Parliament) adopted a Law Amending the Radio and TV Act (SG No 112/28 November 1997). On the basis of this amendment, a National Council for Radio and Television of 7 members was established in December 1997 Four members were elected by the National Assembly and the other three members were appointed by the President of Bulgaria. Stefan Danailov, Yosif Sarchadzhiev, Alexander Tomov and Ivan (Ivo) Draganov are the elected representatives of the parliament. The presidential appointees were Dimitar Korudzhiev, Georgi Lozanov and Milcho Kostov.
Another amendment of the RTVA adopted in the end of 1998 (SG No 138/1998) increased the number of members from 7 to 9 divided in two quotas — five members elected by Parliament and four members appointed by the President. Thus, the new electees of the 38th National Assembly were Alexander Tomov, Yosif Sarchadzhiev, Dimitar Korudzhiev, Ivan Draganov and Nelly Ognyanova. The President appointed Toncho Zhechev, Georgi Lozanov, Svetlana Bozhilova and Alexander Ivanov.
The year 2000 saw multiple changes of the NCRTV body of members. Nelly Ognyanova resigned in the beginning of the year and was replaced by Ivaylo Petrov who was elected by the National Assembly on 24 February. One month later the President of Bulgaria appointed Valentina Radinska to replace the deceased Toncho Zhechev. In accordance with the RTVA requirements, the first renovation of the NCRTV by a draw of lots took place in late 2000. The ‘short straws’ went to Alexander Tomov and Ivan Draganov from the parliamentary quota and to Alexander Ivanov from the presidential quota and accordingly they had to leave the Council. On 21 December 2000 the National Assembly re-elected Alexander Tomov and Ivan Draganov for a second term as NCRTV members, while the President appointed a new member, Boyka Yancheva. A little more than three months later Boyka Yancheva resigned and was replaced by Mladen Vlashki.
The NCRTV priority in 1999—2001 was the licensing of radio and TV broadcasters. This is how the media market in Bulgaria began to shape up. The entities which intended to set-up a programme had to apply for a radio and/or TV license to broadcast their programmes by air, cable and/or satellite. The licensing procedure was carried out jointly with the State Commission for Telecommunications (STC). The NCRTV contributed to the procedure by providing to the STC opinions and reasoned decisions on the applicants’ programming documents.
The first private nationwide TV and radio broadcasters were licensed in the same period, 1999—2001: Balkan News Corporation AD became the first private national TV broadcaster, Darik Radio received the first license for private commercial radio broadcasting and Nova televisia — Parvi chasten kanal AD [Nova TV — First Private Channel AD] entered the market as the second private nationwide TV network.
Pursuant to the 2001 amendments to the RTVA (SG No 96 of 9 November 2001), the National Council for Radio and Television was dissolved and the NCRTV members were released from office. NCRTV Presidents: Alexander Tomov (December 1997—July 2001) and Georgi Lozanov (July 2001—November 2001). The legal successor of the NCRTV is the Council for Electronic Media (CEM).
Since 2001 the CEM is responsible for the regulatory functions on a national level.
The first members of the Council for Electronic Media were: Lilia Raicheva, Veselin Stoikov, Maria Stefanova, Margarita Pesheva, Raicho Raikov (elected by Parliament) and Georgi Lozanov, Toma Ivanov, Stefan Dimitrov and Yuliana Toncheva (appointed by the President of Bulgaria).
In 2002 the CEM released Veselin Stoikov as it was established that Mr Stoikov does not satisfy the legal requirements for being a member of the regulator. Pursuant to a decision of the National Assembly he was replaced by Anna Hadzhieva.
This was followed by periodic renovations of the CEM body of members in accordance with the rotation arrangements introduced by law. According to these arrangements, the terms in office of the members from the parliamentary quota are intentionally ‘misaligned’ with the terms of the members appointed by the President to ensure that the CEM remains independent from potential political interferences.
Two years after the establishment of the Council for Electronic Media, the body of CEM members was renovated as required by the RTVA. Following a draw of lots, Anna Hadzhieva, Raicho Raikov and Georgi Lozanov had to leave the Council. The National Assembly elected Raina Nikolova as a new member and re-appointed Raicho Raikov for second term in office. On his part, the President of Bulgaria appointed Marko Semov. 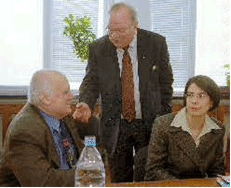 Отляво надясно: Марко Семов, Райчо Райков, Райна Николова
The CEM body of members was again renovated in November 2005. This time around the draw of lots sent away Margarita Pesheva, Toma Ivanov and Yuliana Toncheva. The President replenished his quota by appointing Lyudmil Staikov and Milen Valkov, while the Parliament voted a second mandate to Margarita Pesheva.
Regretfully, Raicho Raikov passed away in late 2006 and Marko Semov in early 2007.  Until the end of their mandates the CEM was replenished on an interim basis with Maya Vaptsarova (parliamentary electee) and Boicho Kulinski (presidential appointee).
The six-year mandates of Stefan Dimitrov, Maria Stefanova and Lilia Raicheva expired in November 2007. However, the CEM renovation this time was delayed by almost one year. In October 2008 the National Assembly left Maria Stefanova for a second mandate as a CEM member and took back on-board the CEM Anna Hadzhieva (who had to disembark following the first rotation in 2003). The presidential quota was replenished by the appointee Anyuta Asenova.
In October 2008 the CEM released from office Lyudmil Staikov as it was found that Mr Staikov does not satisfy the legal requirements for being a member of the regulator. The President replaced him with Georgi Stefanov.
The following developments have been essential for the shaping up of the national media regulator’s contemporary model of functioning as well as for raising its public impact and international prestige in the context of Bulgaria’s integration in the EU:
- The Radio and TV Act was fully aligned with EU acquis, including with the provisions of the Audiovisual Services Directive;
With support from the EU's PHARE programme, the administrative capacity of the CEM was strengthened and an integrated monitoring system was deployed with 6 regional centres in Plovdiv, Blagoevgrad, Varna, Vidin, Burgas and Veliko Tarnovo;
- The CEM hosted the annual meeting of the European Platform of Regulatory Authorities (EPRA) (3–6 October 2007, Sofia). 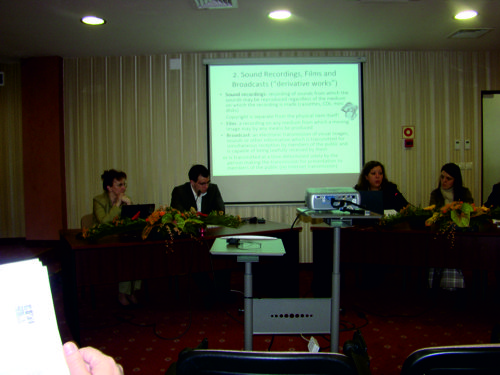 Workshop in Hotel Admiral on a project supported by PHARE 2008.

CEM hosted the EPRA annual meeting in 2007.
Until 2010, the Council for Electronic Media performed its functions in a body consisting of nine members. 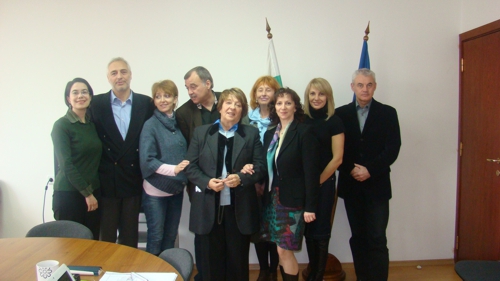 Left to right: Raina Nikolova, Boicho Kulinski, Anyuta Asenova, Milen Valkov, Maya Vaptsarova, Margarita Pesheva, Maria Stefanova, Anna Hadzhieva, Georgi Stoimenov.
The mandate of the presidential appointee Boicho Kulinski ended in January 2010, following which the President re-appointed him for a second term in office. The mandate of Raina Nikolova expired on 21 January 2010. One month later she submitted her resignation and in March she officially left the Council.  The mandate of Maya Vaptsarova ended in April of the same year. The Parliament replenished the body of CEM members by electing Georgi Lozanov and Sofia Vladimirova. 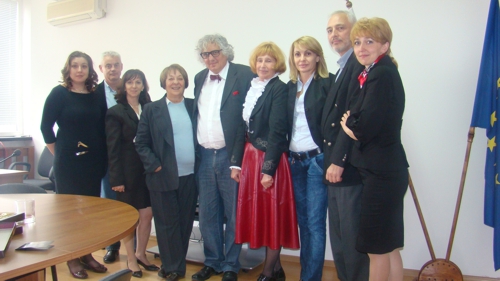 The new CEM body of members in 2010.
The next years were a period of major structural changes of the CEM.
The Parliament voted an RTVA amendment which reduced the number of CEM members to five: three parliamentary electees and two presidential appointees. The President vetoed the change with the argument that the amendment had been made for the sake of certain members of the regulator and raised a general objection against the ‘practice of making customized laws which are addressed to particular persons’. The Parliament however overturned the President’s veto. In the end of June, the parliamentary electees Margarita Pesheva and Maria Stefanova, who had commenced a second consecutive mandate, together with the presidential appointee Boicho Kulinski, who was only in the third month of his second mandate, found themselves off-board the Council. In accordance with the legal requirements, the President determined by a draw of lots the second appointee who had to disembark the CEM, Milen Valkov. The continuing members of the CEM were: Georgi Lozanov, Sofia Vladimirova, Anna Hadzhieva, Georgi Stoimenov and Anyuta Asenova. 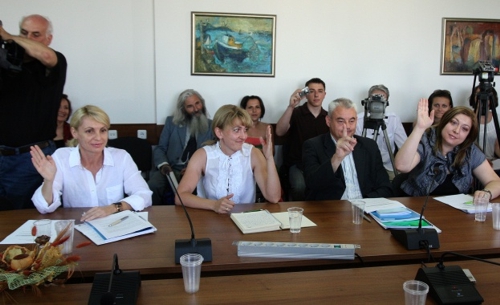 The mandate of Georgi Stoimenov expired in 2012 and the new president appointed Maria Stoyanova. 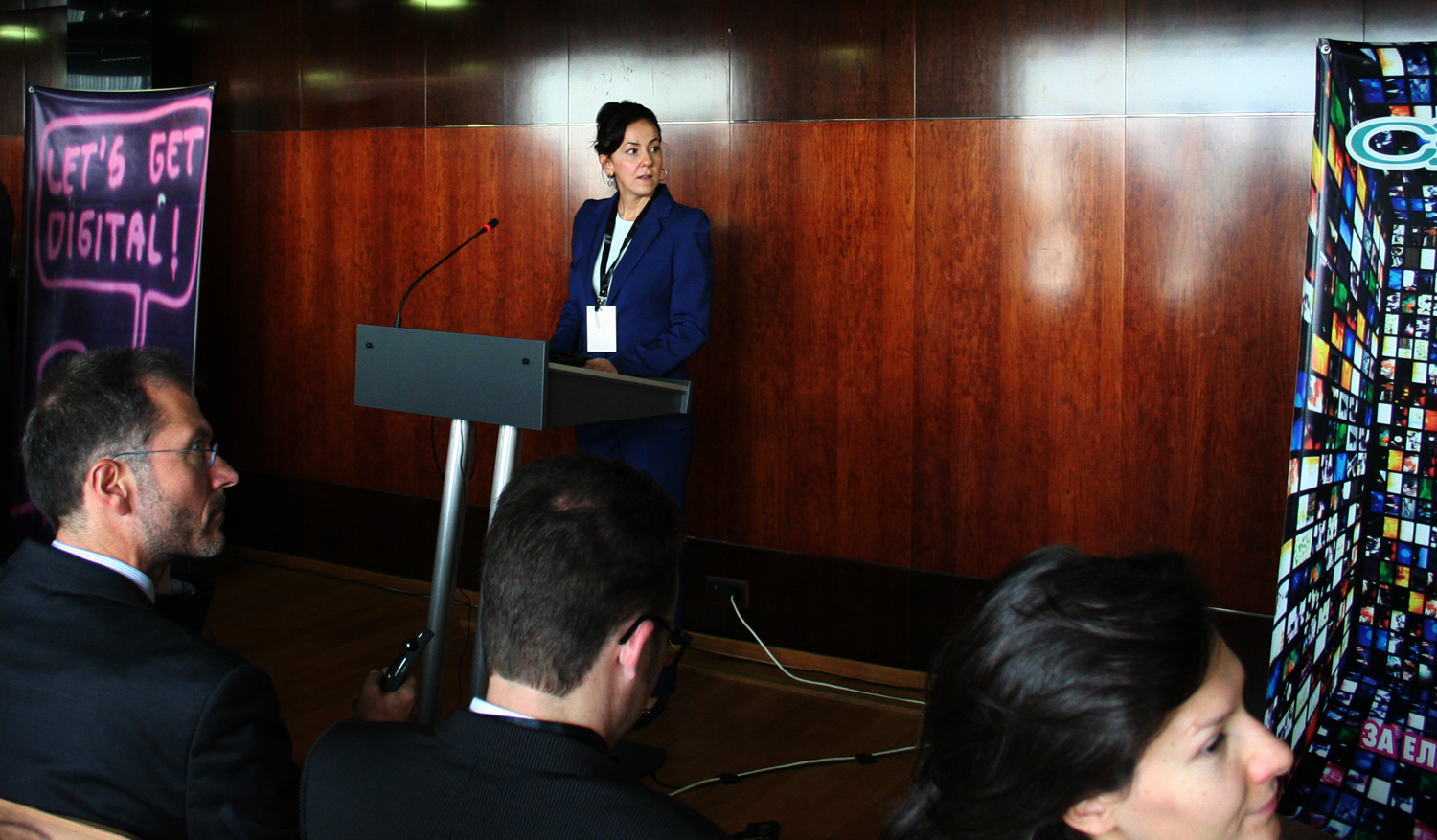 Maria Stoyanova
Discussion platform under the auspices of Rosen Plevneliev, President of Bulgaria:
ONE YEAR BEFORE THE START: DIGITAL BULGARIA
In the same year 2012, the draw sent Sofia Vladimirova off-board the CEM. One year later the National Assembly elected her substitute, Ivo Atanasov.
Two years later, in the end of 2014, the mandates of the parliamentary electee Anna Hadzhieva and of the presidential appointee Anyuta Asenova expired. The latter was substituted by Betina Zhoteva. However, Mrs Zhoteva had to wait one year before she could take office, because the Parliament had to decide on the electees from parliamentary quota as well. In the meantime, Georgi Lozanov resigned both as a CEM President and member in early 2016.
In April 2016 the body of CEM members became complete as the National Assembly elected Sofia Vladimirova and Rozita Elenova, and Betina Zhoteva, who had been appointed by Presidential Decree, took office.
On 9 May 2016 the Council elected Maria Stoyanova to the position of CEM President.
Sofia Vladimirova was elected as CEM President on 9 May 2017 and re-elected for a second term exactly one year later.

December 2016: Celebrating the 15th anniversary of the Council for Electronic 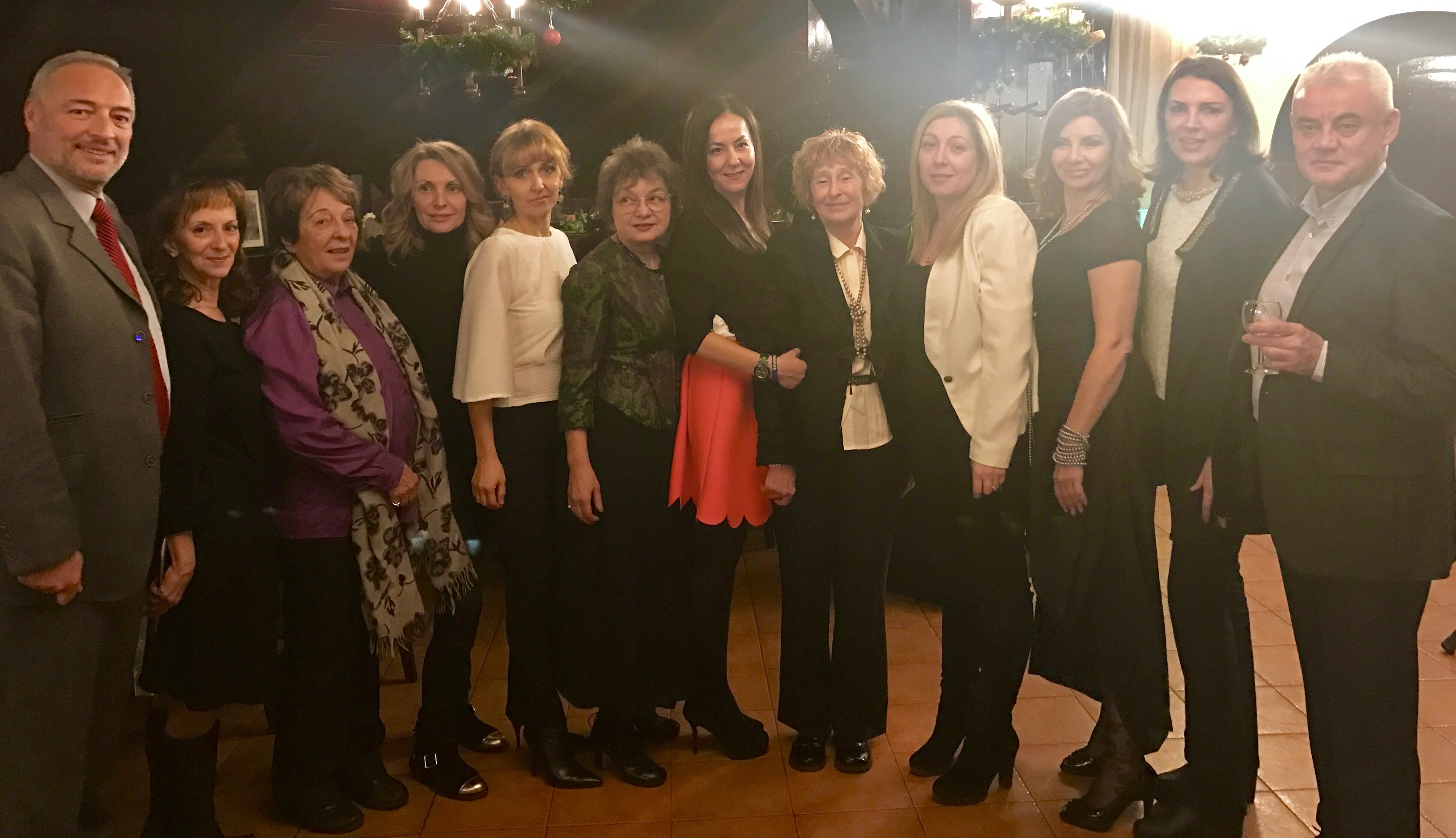